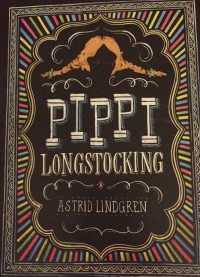 I went back to a classic book recently and picked up Pippi Longstocking by Astrid Lindgren. The book was originally written in Sweden in 1945, but was brought to America in 1950. I was first introduced to her through a series of movies based on the books that were originally a tv series in Sweden that had been edited together and then dubbed (extremely badly, but we loved it anyway) for American audiences.

Growing up as a red-headed little girl, Pippi Longstocking was a bit of a hero to me. It was one of the characters I could see myself in and also wished I could be. She was silly and fun, strong and independent. She had no fear and was very comfortable in her own skin. She also worked her way through different situations that might feel really scary for kids and she was doing it alone, without her parents (why are red-heads always orphans in stories?). She was also a friend who could let Tommy and Annika let lose a little bit coming from a very uptight, prim and proper household. I just loved her. Who doesn’t wish they could stay home from school and do the things you want? She was also very good about doing chores around her house and taking care of her animals. All in all, she is a good kid trying to get by the best she can while having fun. Not having parents around allows her to act in certain unruly and mischievous ways and Tommy and Annika are a good antidote to things going completely wrong, but are complete followers.

Reading the book as an adult and thinking about the original movies I realized they stayed very close to the story line and really didn’t veer very far off. The movie was put together with episodes from the original tv program and they pretty much went from chapter to chapter. I thought that part was very good.

I realized I have a couple of issues with her as a character in this day and age. The first being Pippi is so strong that it is almost too much. She is never in trouble, she never runs out of money, she never makes a mistake that she has to be held responsible for, there is never a problem too big or too crazy. As a kid that is kind of fun, but totally unrealistic. We all have responsibilities in this world and when she is called out on her actions at the coffee party she doesn’t accept or realize them and carries on as she is. It is the only time in the book she is held responsible and she turns it back on Tommy and Annika’s mother. She really has only one “setting” (she is constantly on and unruly) and isn’t as layered as I like my characters to be, even in kids books. I like when characters are a little bit unruly, but there are always limits and there are no limits in this story. She can also be quite mean to people. Maybe she isn’t trying but again, when she is talking to the girl who is looking for her father Pippi doesn’t help but makes fun of her. Tommy and Annika just laughed.

My other issue with her is her constant down play of schooling. This might just be me reflecting on current situations happening in our country, but it also confuses me. In this story she has a pretty decent knowledge of many worldly things through her travels on the boat with her father and is a very curious child, but is constantly putting down learning through school. As kids we all wished we didn’t have to go to school but there is value there and I wish she had learned a little bit so that she could actually earn the days off she wanted. I admit there is value in being creative and curious and figuring things out on your own and doing learning outside of school. This message just didn’t set well with the adult me. The kid me probably agreed with her – I struggled with multiplication!

It was a fun, fast read that I was hoping to love as much as I loved the movies as a kid. It ended up being just ok. If you are looking for something light and fast for the kids to read, I recommend it. The version I had offered a few fun illustrations and the story was only 160 pages total with larger print making it feel less daunting for reluctant readers. I think ages 7 and up will do well with it.