Over the winter holiday we spent a couple of weeks in Whistler skiing. We take days off and usually have afternoons open for relaxing so we look for new activities we haven’t done there before. After doing our first escape rooms at Portal Escape Rooms (in the Eugene/Springfield area) over Thanksgiving we had a quick look to see if there were escape rooms in Whistler. Lo and behold! They do have escape rooms and they were a lot of fun!

Escape! Whistler is located at the base of Whistler Mountain, among Art Gallery Row in the Hilton Resort and Spa. They offer 4 different experiences of varying levels. At this location you have only 45 minutes to solve the puzzles and find your way out. You will have a walkie-talkie to ask for clues when you need them although to make the leader board you have to solve the rooms with no clues. We needed a few clues!

We tried the Buried Cabin room first. The story goes that you are invited by a friend to his or her back country cabin for some serious powder skiing after a big storm has blown through. The snow has built up creating a great situation not only for skiing but also for avalanches. Sadly the avalanche comes rushing down the mountain and you have to solve a series of puzzles to escape the room. They have rated this room an intermediate level and told me it has a 20% success rate. The puzzles are great and we found them challenging. Each person in our party brought a different mind set which we found really helpful in solving each task. We managed to find our way out and called the experience a success!

We had so much fun with that room that we made a second reservation for another room a few days later.

Next we tried the “Rabbit Hole”. This one is rated the most difficult and has a bit of an “Alice in Wonderland” theme. The story line goes that you are out for a walk in the woods and see a very strange rabbit running around. You are not entirely sure why but you decide to follow the rabbit (sound familiar?) and end up going down the rabbit’s hole which puts you into a weird and wild world where you are not entirely sure how to get back home. We did find this much more challenging but found our way out in time as well. 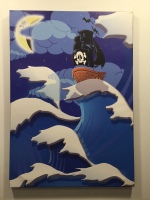 There are 2 other rooms. The easiest room is the “Pirate Ship” and they were building a room called “Pinball” which was not open while we were visiting (Jan 2018).

All of the rooms were well done, some with amazing art and I loved that they stayed to the themes of Whistler and the area. Scenes were very detailed and the puzzles were clever and challenging. Each of us found we were solving things that other’s weren’t and we talked about the rooms for days afterward and how we couldn’t believe we missed that or how clever we felt about solving this.

We really enjoyed our time here and will definitely be back to try the rooms we haven’t solved yet. We highly recommend it!

One thought on “Activity: Escape! Whistler (Whistler, BC)”