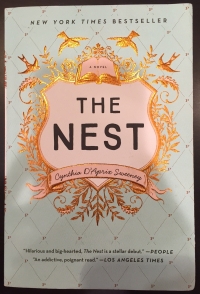 Warning, there are spoilers so proceed with caution if this is a book you want to read.

I was at my favorite local bookstore and came across “The Nest” by Cynthia D’Aprix Sweeney. It was recommended by the the staff at the shop and the accolades all over the internet and the cover had me thinking the synopsis that was printed on the inside bookflap sounded great. It was meant to be funny, hilarious, big hearted, intoxicating, witty, and tragic. Sadly, upon finally finishing the book the only descriptor that I really felt fit was “tragic”.

The story revolves around the Plumb Family. There are 4 siblings who are pining for the youngest amongst them to turn 40 so they can all finally collect the shared inheritance, which they call “the Nest”, that their father left them when he died. It was always supposed to be a smaller sum, just to give them “a little something”, but due to markets growing and a manager who made some smart moves, that small sum became a large amount and each of the siblings thought they were going to be able to take care of all of the missteps they have made banking on that money. Many missteps were made because they thought they had the safety net of the money. That is until their oldest brother Leo, a drug using, hard living womanizer gets behind the wheel of a car with an 18-year old undocumented waitress and ends up crashing the car and the girl loses her foot in the accident. To keep things quiet and to protect her new husband and their own interests, Francie, the mother, uses a large portion of “The Nest” to cover up the story and to hush the girl up. This leads to the other 3 siblings trying to figure out how to get their brother to pay them back and how to sort out the trouble they had gotten themselves into.

On top of all that there are nieces, girlfriends, renters, friends, husbands, boyfriends, extra work associates, and more that muddle the story. It all just got to be so much on top of finding several of the characters highly annoying and stereo-typical. Drunk matriarch, druggy brother, a middle sibling who was “lost”, a 4th child who is all but forgotten and nobody can remember her birthday despite it being when they finally get the money, and then the token gay brother. She has thrown in all of the stereotypes possible (I feel like we are just missing a foreign au pair that the dad runs off with, but that ends up being a 20-something aspiring actress, so I guess we are covered). The teenage girls were fine to begin with, but then that took a turn as well, and the most stable characters in the book ended up being the ones that completely fall apart by the end of it. I also found it strange that the author felt she had to shore up the future for several characters in random comments mixed into the story, including a baby which was only in the last chapter:

“Years later, when the tree had grown and formed the perfect canopy over the rear of the yard, Lila would marry beneath the massive leafy boughs turning red and orange on a blindingly beautiful October afternoon. She would ask Jack to escort her down the leaf-strewn path to her partner. Jack would be good to Lila all her life, showing up whenever she was missing a father. On the day of her wedding when Lila appeared on Jack’s almost-seventy-year-old arm, Stephanie would see Leo at her side and for a debilitating moment would be crushed by he enormity of everything he’d missed.” – Page 351

And then we are straight back to the one-year-old’s birthday party.

It was just too much and I really struggled trying to get to the end, but I did it. I didn’t find the book funny at all. Apparently I have a different sense of humor than the other reviewers. This was a cumbersome slog through a difficult family surrounded by greed, selfishness, anger, insecurities, and materialism. It had a promising premise, but I really couldn’t find a single character I enjoyed reading about and I haven’t missed a single one since I finished.