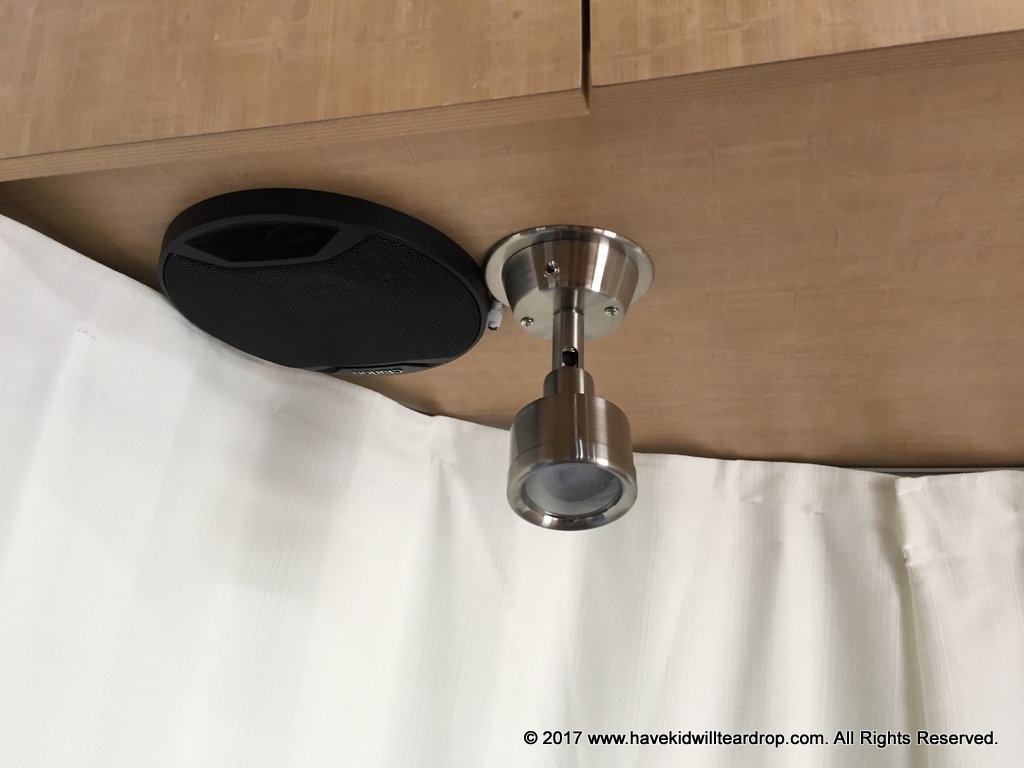 Ok, so is dimmable even a word? I don’t know. It isn’t showing up in autocorrect, but that is what my husband set out to create – dimmable spot lights. Here is his guest article about how he updated the nice but super bright spot lights in our Airstream. My husband is an electrical engineer and a tinkerer, so he is super good at this stuff and this is what I came home to after going for a Dim Sum lunch! Oh the irony! Dim sum…dimmer switch….I am going to leave it there!

We have a 2016 19′ Flying Cloud and it has these great, but at the same time horrible, LED spot lights. Each is individually switched, great, directional, great, but no dimming, just bright, bright, bright. There are four of them, two upfront over the dinette and two at the rear over the bed. 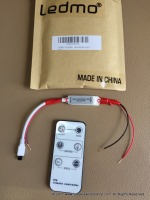 The bed ones are great for reading but not for more relaxed mood lighting. I set out to modify these LED spot lights with dimming capabilities. I found these LEDMO(1 Pack) Mini Remote Control Dimmer for Single Color LED Strip/LED Ribbon/LED Tape, 12VDC 6A, 72W, IR 6 Key Remote Controller with Wireless Remote on Amazon. Note, in my photo I’ve cut off the connector plugs and prepared the wires. It’s rated at 72 watts, plenty for these lights. There is an input set and output set of wires.

Here is how I did it:

Next, cut the -Negative connection. It’s the white wire and at least in my trailer it was labeled. The black negative dimmer input wire will connect to the white negative wire hanging out of the trailer panel.

Next you need to cut or unsolder the black positive wire which is connected to the switch on the light. It’s hard to see in the picture but the black wire leading to the light is disconnected now.

The now available switch terminal is where you wire (solder) the red dimmer switch input to. By doing it like this the manual switch can be used to still turn on and off the light. In the off position you are not powering the dimmer avoiding any vampire loss.

Now next it’s time to pack it all into the light fixture. It’s a tight fit which is why I soldered the wires together and did not use wire connectors.

The dimmer switch has a IR sensor which needs to be left out of the light. Rather than drilling holes anywhere I just gently squished the wire and sensor off the side of the fixture. Yes this method is not perfect looking but still very unnoticeable in my opinion. I used a screw driver to point to the little white sensor is in the photo.

Be careful when screwing it back up not to make it too tight otherwise you will slice the sensor wires.

Now you can use the lights. Switch them on, then use the remote to turn them on. This is not the best dimmer setup as you only have 4-5 light steps but it takes the LEDs from blinding to mellow.

If you use the manual switch to turn the lights off then when you manually turn them back in they will turn on at the same level you left them.

I’ve put a small mark on the light to remind me which manual switch setting is off.

Oh, this dimmer also has a flash and bright to dim function just in case you like that stuff.

If the remote is close to one sensor you control that light. I’ve found that one remote can be used to control all lights. Pull it away and you can control two lights at the same time.

One thought on “Tips & Tricks: Making the spot lights dimmable”