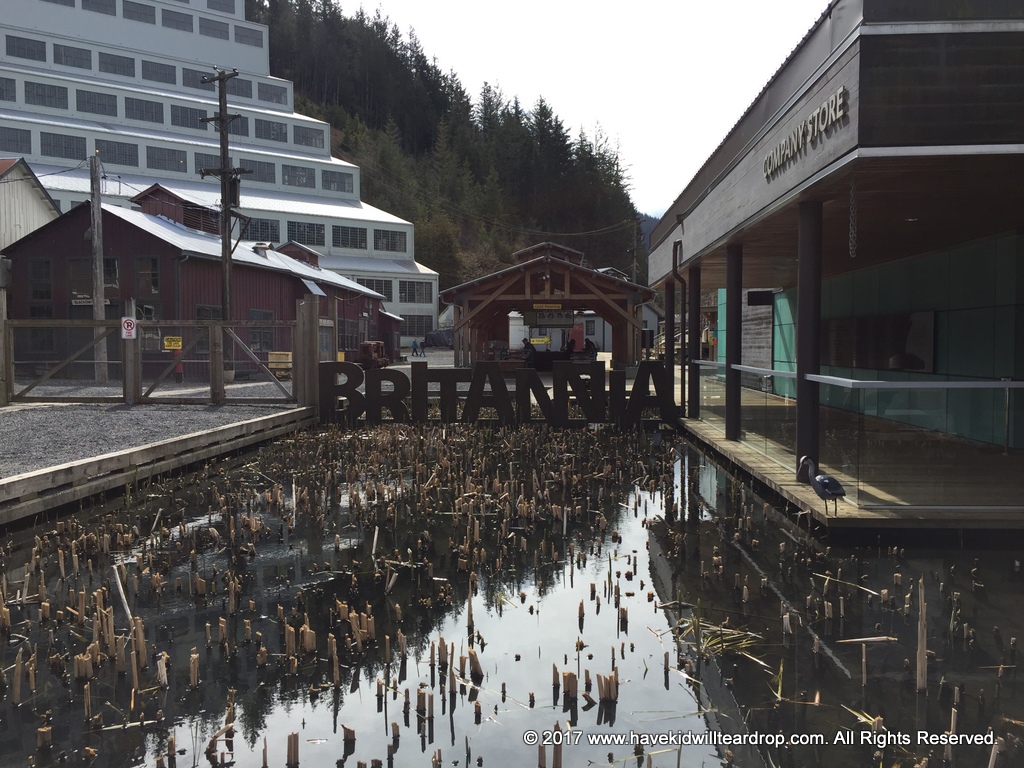 During our spring break trip to Whistler we decided to take a trip down the hill to the town of Squamish. We pass through here every time we drive to Whistler and one thing that always stands out is the big mine. We have often said as we zoomed by that “one of these trips, we should stop and check it out”. This was that trip where we made the time to check out Britannia Mine Museum!

The Museum is around 45 minutes north of Vancouver or 10 minutes south of Squamish. It is an easy drive from either direction and is easily spotted off the Sea to Sky Highway (Hwy 99). The admission rates are on the high side but you will easily be able to spend 2 hours here if you are like us. While we were there we paid $29/adult and $18.50 for our 9 year old (click here to see the rest of the rates available as there is a break down…kids under 4 are free). This price gives you all activities in the museum including gold panning and also includes a guided tour which my son absolutely loved (and all of us adults did too!). 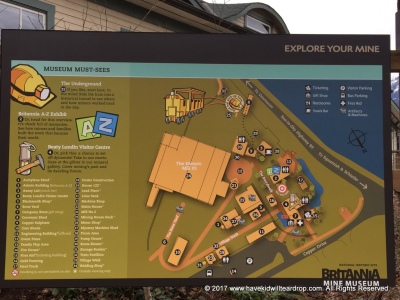 The Britannia Copper Mine opened in 1904 and was operational for 70 years, producing much of the copper the world enjoyed during it’s day. They say so much copper was pulled out of that mountain and exported that with recycling that has happened with metals, it is very likely that everyone has some copper in their homes, phones, or cars that originally came from this mine. That is pretty amazing! 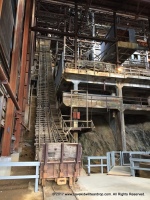 The large building you see climbing up the mountain is called Mill 3. Turns out the first mill built didn’t really work so they built a second mill which burned down resulting in this Goliath of a building that was completed in only 18 months and for $1 million, which back then was an enormous amount of money. This is the building where the “muck” was brought from deep inside the mountain and was sorted through to get the minerals they were looking for – namely copper but there were other things they found as well. If the outside impresses, wait until you go inside. There is a set of steps that you aren’t allowed to climb, and I am not sure I would want to! They are super steep, but the mill worked with gravity and you had to go up high for it to work! 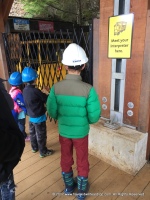 We had a good look around until we needed to head to deck where we met our guide (interpreter), Angela. She backed the little train up to the deck where we got our hard hats and let us know what was going to happen as well as some of the history of the mine. The mill is located at Britannia Beach and this was also the home of one of the mill towns that supported the mines. Highway 99 wasn’t build until the 1950s and so this area was very secluded and required a boat ride if you wanted to get to Vancouver. There were over 60,000 employees that called Britannia Beach and 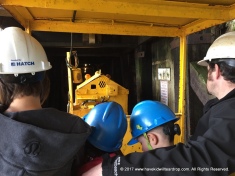 Mount Sheer (the two main mining communities there were other camps around as well) home. Folks that worked in processing and shipping operations lived in Britannia Beach and the mining operations employees lived way up on Mount Sheer. The community was tight knit and saw more than their fair share of joy and tragedy. This deck overlooks beautiful Howe Sound and it one entrance to 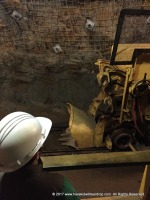 the mine. There were over 210 km (130 miles) of tunnels dug into this mountain. Much of that has been closed or filled due to environmental impacts to the Sound and surrounding areas. The little train will bring you into the tunnel which turns out not to be that long, but they have it fitted so you feel like you travel through time. The train and drills are quite loud, so if you are sensitive you might want to bring ear plugs. She shows how they stored their dynamite and the various drilling tools they used. She talked about how hard and dangerous their jobs were. I 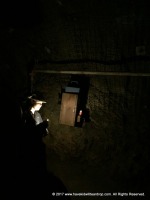 think one of my son’s favorite things was the “muck machine” which is a little vehicle on a track that scoops up the “muck”, so it can be loaded into little cars and transported to the mill for processing. We also got to see how dark the tunnels were when the candles went out and how much light they had and what sources they used for light. What was really cool was comparing those light sources to the flashlights on our cell phones. The tour was fantastic and I didn’t see any of the kids saying they were bored or upset. They all were completely enthralled and interested. 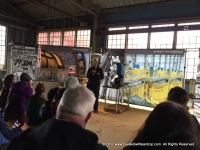 The tour ended in Mill 3 and Angela told us all about the processing and touched on modern mining and how things work. It isn’t really that different than it was 100 years ago, just more automated. Once we had been through the tour, we felt like the price of the ticket paid off. I know my kid liked it a lot as he totally ditched us and sat right up front so he could hear what she was saying even better!

Other activities in the buildings include a fantastic video about life at the mine historically and what has happened more recently. It is really well done and while educational, it was fun! There is a section of touch screens and learning about various types of metals. The “rock room” was really cool, but I will admit I was a bit disappointed with the touch screens as many weren’t working while we were there. I guess we will have to go back! The gold panning outside is really fun and you get to keep whatever you find (there are little plastic bags to put your finds in…there isn’t just gold either!).

Being someone who LOVES history, I loved the A to Z Britannia which was a display about the history and the people who build the mine and called it home. We also loved looking at the stacks and stacks of core samples and you will get to hear the original “whistle” blow frequently.

The whole experience was fantastic and I would highly recommend the stop to folks who are passing through the area. Make sure you take a couple of hours to visit the Britannia Mine Museum! 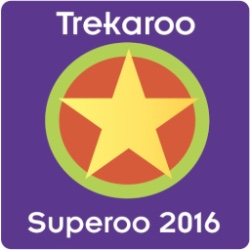