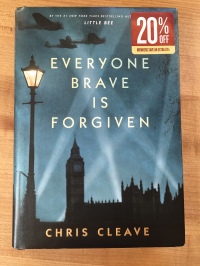 I was looking for a new book to read and to step away, again, from my favorite genre of murder/killing/mystery/suspense. My sister suggested I read Everyone Brave is Forgiven, a historical-fiction novel taking place during the Blitz of London between 1939-1942. She had just read it for her bookclub and they gave it mixed reviews. She thought I might like the historical aspect of everything. And she was right about that.

The book was inspired by the authors grandparents and letters that had been saved from the war. He also used stories that were passed down from his grandfather as inspiration.

The story features 3 real main characters and tells each of their stories from their perspectives along the time line. There is Mary North, who is the wealthy daughter of aristocrats and who’s father serves in the government. There is Tom Shaw who works in Education and gives Mary a job and ends up falling in love with her. Lastly there is Tom’s roommate Alistair Heath, he signs up for the army after all of the art at the TATE he helps to restore is boxed up and shipped away to be protected from the bombings. The story becomes a love triangle among bombings and tragedy.

What I really liked about the book was the history and explanation of what people went through and how some may have been thinking. PTSD was never diagnosed back then, but to see people suffering from constant tragedy in this time brought humanity to it. My grandparents never spoke of what they saw during their service. It was how they dealt with it, but to have a novel that puts you in the middle of both the bombings “at home” and in the war “in the field” was something I found riveting and it helped put some things into perspective for me. I also found the story about the various social classes not really clashing, but starting to intertwine despite protest very interesting. We know of the prejudice in America during the time. We were going through segregation. While it wasn’t as blatant in the UK as it was here, there was definite prejudice. I like how Mary stood up for what she thought was right at great cost to her. I wish she had been able to continue, but the times being what they were I understand it isn’t possible.

I also like that Mary is a strong female lead, but she is horribly flawed. Just like all humans. This was something I appreciated. She was also funny and witty and I really enjoyed reading the conversations in this book. It was night to break up the really heavy scenes with this humor and when it wasn’t there I really missed it.

I am not sure if people really were excited about the war in 1939 London, but Mr. Cleave makes it sound as though the women in this book just can’t wait for something exciting to happen. I found that a bit difficult to accept, considering they had just come out of the World War 1 only 20 years before. Granted these girls were born after that war, but everyone was still recovering. I also found Mary’s friend to be very annoying and was glad she wasn’t in the book as much. I appreciated her saving Mary’s life during a very intense scene.

I also felt there were times I wanted more of something that was happening, and other times felt like I needed less. It was a strange thing I haven’t really felt in other books.

All in all I enjoyed the book, but was left feeling disappointing with the ending. I felt like things were built up just to fizzle out over a nap in the final pages. If historical fiction is your jam, this might be up your alley. If you are really into history, it might not be.